Where as the time gone?!?! I see I haven't written anything since 2013, well not much has changed.

Still looking for full-time work, have a boyfriend now, that alerted the press right away LOL. Things have been good though I can't complain.

When I started this blog I was in my mid-twenties just writing about sports and a little of my life lessons in school. I then stopped writing and just started doing social media work. Now a few years later it is blogging for a Highland Park community web site that will get me writing again.

It might be a little weird to explore new stories that aren't sports related, but to be doing something for my community should be exciting and fun!

Let's just see if I can get back to the swing of things :/

Last week was my last class at Cal State Northridge. While all my skills have been put into full gear, I can't help but think in the back of my mind if I need more?

I think that's a simple question to answer, YES! but I also think that I can learn more from just listening to a professor or reading an academic book. I find myself learning so much from new people I have met outside of school.

There seems to be something interesting (hot at times) about listening to someone else's passions and goals in life. There are subjects I may have learned in school that is didn't care for. But once hearing a person talk more in depth on a subject, I didn't pay much attention to in class I have learned to appreciate it more and follow up on researching it after a talk.

I have always loved school and I am a big nerd at heart! That is why I know if things workout in the future I may go back for my masters.

For now though I will take a break, live life to the fullest and keep learning in different ways.

PS. Congrats to all my friends about to graduate this coming week!
Posted by Unknown at 11:58 AM 15 comments: 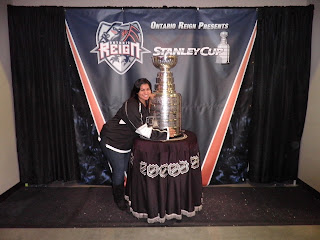 Again this year was GREAT.

In sports, well it had its up and downs, but the best part for me and what can compare to anything else was the Los Angeles Kings winning the Stanley Cup for the first time in franchise history!!!.

Kings fans waited 19 years since the last appearance in the finals by the team. It was long frustrating years, but WE WON the CUP. After firing the coach in late 2011 L.A. brought in Darryl Sutter. The Kings offense was the lowest in the league, but still managed to take the eighth seed in the playoffs.

Then the unthinkable happen..

The Kings could not be beat on the road winning 10 straight games, winning favored Vancouver, sweeping St. Luis and passing through the Coyotes. The eighth seeded Kings won the Devils in the championship to raise Lord Stanley for the first time in and in front of their fans at Staples Center.

This was so amazing I cried like many other fans did. I was able to attend the parade and go to the rally. As a hockey fan since I was little this was something I will always cherish and remember. 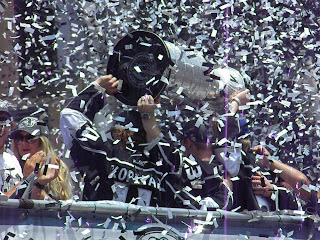 The Dodgers FINALLY received new owners and the face of the ownership being Magic Johnson. While the team struggled during the season, the new owners are making sure fans and other teams know they can spend money. Let's see if it works out this 2013 season.

The saddest part of the year though would be the trading of James Loney. I will definitely miss him this season :( 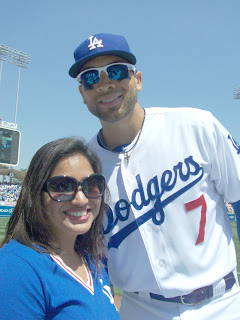 Until next year everyone have a safe and HAPPY NEW YEAR!!!!! 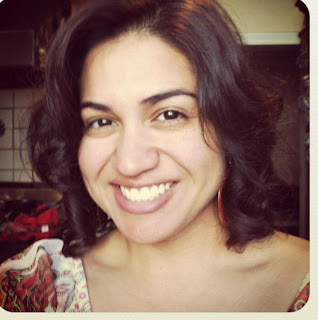 Well, it looks like it is almost time for a New Year, even though some are saying the world is ending in a few days. I am writing a little recap on my 2012 year in review. This probably be more about me and I can write another one later on sports in my life :)

Positive note is having a few new opportunities too.

hmmm where to begin, I can't even remember the beginning of this year (laughing) guess it was pretty boring for a while. Oh wait I took a trip to Santa Barbara and San Luis Obispo with my bff Amanda and it was FUN!!! 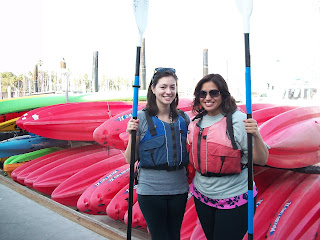 Only cool thing about school is that I learned how to work in marketing with the Daily Sundial, the CSUN school newspaper I use to write for.

It was fun coming up with promotions for students to pick up the paper, read online or their mobile. I was also still working with the CSUN athletic department, which helped me grow in more ways in a field I like to get into one day.

I stopped drinking in the summer, which did me good and now I don't drink as much as I use too! :)

Met knew cool people that became friends and networking partners, which helped me a lot in the field of sports. I think that is it, that I can actually write down for you all to see ;) I will be back shortly to talk about my time in sports, which is definitely more excited since I have no life right now!

Oh and I went to Disneyland at some point during the year... maybe it was spring break, I can't remember.. 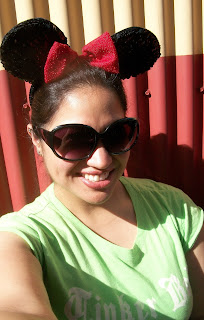 Me and Lord Stanley..and other news 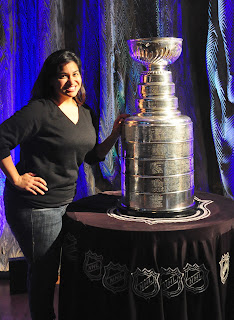 Yes I am still alive and well. :) I have been ridiculously busy with grad school. I know the story of my life right? I must admit though, while school is kicking my ass, I am enjoying life!

Today guess what I did? well I finally seen Lord Stanley at L.A. Live today. I kept missing chances to go and see it and this time I wasn't going to let anything stop me. I had my homework done and was ready for my photo with it.

I was in complete awe when it was there, I am not going to lie I was even sweating like if some cute guy was waiting for me across the hall. My heart was racing and I just wanted to stay next to it. It was amazing to see all those names on the Cup and realize this life long sports symbol has so many stories that people will never know.

The reason I love the game of hockey is partly because of the Stanley Cup. There is nothing worth seeing
than a team, like my L.A. Kings, hoisting it up in celebration with teammates and family.

I can now say I touch and took a photo with Lord Stanley :) 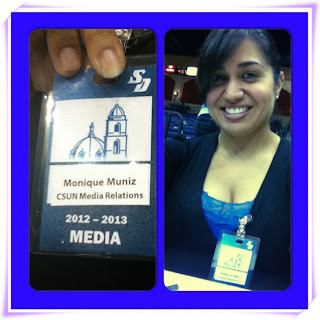 Since September life seems to be going good to me. I have good health, family and friends who are supporting me like crazy. I might have had too much fun on the weekends, but with three weeks of school left I am staying in doors to study and resting. I had some great opportunities too: interning with the Big West Conference, working with the athletic department at school and blogging for ESPN during the DIRECTV Classic. Pretty sweet uh? alright I better get going, my work is never done, but I hope to write a little more soon!
Posted by Unknown at 10:10 PM 2 comments: 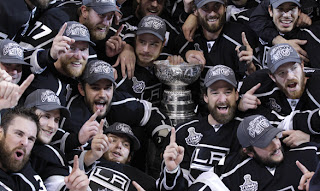 The wait is now over, after 45 years of no championship, the Los Angeles Kings can now call themselves World Champions after they defeated the New Jersey Devils on Monday night at Staples Center.

What an amazing run this team had: The first eighth seed to win the Cup, 10-0 on the road and the only team to go up 3-0 in each series.

This truly was a Cinderella Story team and a season to always remember.

As I came home to watch the game Monday night I was nervous and stressed as to what was to come. Who could have foreseen a five minute major penalty that led to the Kings to score three goals? It was amazing if
you ask me.

Being a fan for 18 years and a season ticket holder a few years back this was definitely worth the wait. I was able to watch the last period with my dad and the celebration. My father is the one who taught me sports and how to love them. While I might have not been at the game, I can at least say I was with my father to witnessing the Kings first every Stanley Cup.

Words cannot express how I felt the after seeing Dustin Brown hoisted the Cup over his head. I started to cry just a tad bit while goose bumps ran down my arm. I am proud of this team and what they were able to accomplish after some people didn’t think they would get this far.

…next blog is on the parade!

How about them KINGS 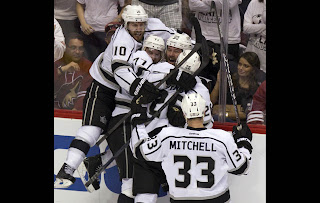 Well out of three Los Angeles teams that were in the playoffs the Lakers and Clippers have drifted away as both teams lost in the second round of the playoffs.

Here we are the end of May and we still have L.A. hockey to cheer for. The Los Angeles Kings are the lone team that has a chance for bring home a championship to this great city. Of course, being the spoiled city we will see some people jump on the bandwagon for the Kings. This isn't to say that it all bad, but the team knows they will have new fans coming to support them.

I personally don't like those that jump on the bandwagon, but for the game of hockey in L.A. this can be a good thing for the sport and the city. We are consumed with the Dodgers and the Lakers, but now it is the Kings time to shine. Here they are after 19 years in the Stanley Cup Finals for only the second time in the teams history.

They have set an NHL record for most post-season road wins and knocked off the No. 1, No. 2 and No. 3 seed to reach the Finals.

L.A. will now face a tough New Jersey Devils team with a veteran goalie in Martin Brodeur, who has won three Stanley Cups. He is now 40 and we know he should be giving it his all in the crease, for this might be the last time he plays on the ice.

The Kings though, are a team that has played with determination and heart. The team is in the midst of winning its first Stanley Cup in 45 year and Kings fans have long waited for this opportunity again and hopefully this time it has a happy ending.

Whatever the case maybe, fans old and new, are sticking with this L.A. team in hopes of a Championship and a silver and black parade around downtown in June.
Posted by Unknown at 10:08 AM 3 comments: